Here I will share with you works in progress, writings that may appear only on this site. The River Diaries are the first of these attempts. I cannot promise to write an entry a day, but I will keep the words flowing as best I can. This is an intimate moment in this vast place of cyberspace—my attempt to shape my writing in the air of a new world.

All quotes from Leaves of Grass by Walt Whitman

Here are our thoughts—voyagers’ thoughts  *

In the mornings, I take my aging dog, Perry, for a walk along the river, the Hudson River as it touches the shores of the Upper West Side. Before nine o’clock, the long asphalt path is mostly empty— few joggers come thudding past, other dog walkers sparsely scattered. The river changes every morning, like the tree in Edward Steichen’s backyard, the one he photographed every day for a year. I am changing too and so is my dog. Today the air is heavy even so early in the morning, but what breeze there is carries the sweet smell of fresh river waters, like a blue equivalent of fresh-cut grass. A haze starts to build, a bright fog that quickly swallows the George Washington Bridge and then parts of the Jersey shore. Not a dense dark London fog, but an early morning evaporation that cools as it hides. Perry lopes alongside me and then veers off to roll in a miniature meadow. I feel an overwhelming sense of gratitude for this time and place, for the quietness of river in a city so dense with life and struggle. Every day I will write about this time, and the thoughts that come to me as I follow my dog into age and the river into the vast freedom that awaits it.

The river again is slow flowing in the continued early May heat. Large white globes bob on its surface, mooring places for the overflow from the Marina on 79th Street. The summer is just beginning so the sailing crafts have not yet found their oh-so-sophisticated berths. Further out, in the main channel, a red and white tug pushes a long flat scow towards lower Manhattan. I think of the vast watery commerce that so marked the early years of New York, the forests of masts, the creaking of sails and ropes, the shouts of sailors, of the extreme importance of this river to the development of this city and ponder its quietness now. A stray lavender balloon, escaped from some weekend event, still swollen with air, floats on the river’s surface and, pushed by the morning wind, leaves its own tiny furrow of a wake.

I sit on the park bench, thinking of my cancer, my apartment and my too-little money, my lover leaving too soon to return to her city by another river, the Yarra, that runs to another sea, the Pacific. My dog pants in front of me, begging for his biscuit. All very simple, really.

Now it is the stormy evening of my morning walk. The heat broke and the sky, the river—all gray. But with the cool came motion and small waves rolled into the slightly green boulders that keep the Hudson in its place along the drive. This time, knowing I had launched this project, I carried a notebook and pen stuffed into a pocket along with plastic bags and dog treats. Perry is very pleased with this new undertaking and a little skeptical. He is not sure I will keep to this delightful new tradition of a long walk down by the river every morning of our remaining life together. The first thing I saw when we came out of the tunnel that skirts the heavy morning traffic was the neck of a loon—I thought. How lovely that such a creature should grace my observations, but closer observation revealed the loon’s lovely long arched neck to be a piece of rubber hose bent out of shape. I cannot ask too much from this dense urban environment, but I know there will be surprises. I walk close to the railing, noticing the few saplings that have taken root in the wayward earth that has gathered in the boulders’ crevices, a penny stranded on the rocky shelf, a wish that did not make its full journey. “Iris” deeply carved into the wood and then in a fancier style, “Duane.” Perry pauses to sniff at a handsome solid black and white dog, male like himself. They bow and skip, then turn to follow us, their ladies. Ahead of me the bridge once again loses its legs in fog. This morning we go further, into new territory where the Parks Department is grading a new road. Here there is nothing between us and the river, no railings, no fences, just a small steep hill of stone. I put Perry on his leash so he is not tempted to drink from the river. In a short while, I see in front of me, a person or perhaps two, lying under a large tree, wrapped in a blanket. I see rhythmic movements, love-making or scratching and I turn away. So easy it is to give privacy in the outdoors, to honor the intimacy of the homeless. A male mallard, green and white, rides the river.

A wonderful breezy day, the day before my 60th birthday. On the way to the river, I free a small flamingo-colored pigeon that had caught itself in the fence. Once Perry and I took the turn for the tunnel I could see it all—the blue below the clouds, the bridge clear in its lines, two ships perched beneath its shelf, more and different blues further off. I walk along the rail, keeping my eye on the river for its surprises, the rail wooden and heavy on top makes me feel as if I am on a lengthy ship, one that stretches for miles, on the safe solid ocean of an Island—I think at first. We pass a wire-thin old man with grizzled beard and dark blue stocking cap. Carefully balanced on his shoulders are two overflowing blue plastic garbage bags filled with returnable cans. He pauses and puts down his property, takes out a piece of paper and studies it. Walking at a brisk pace, we quickly reach the new track, and follow it past the sleeping place we had seen yesterday. No motion now, just a deserted nest, the night storm having taken its toll. This is the part of the walk I like the best, the sprint into new territory with the bridge before me and behind it that grand sweep of the river, its bend that takes it beyond the eye, the low mountains beginning their upward climb with the sky vast, bathed in early morning sunlight. This is closest to Whitman’s beloved vista, the path of possibilities, of boundless optimism, of delight in the spring of the step and the swing of the arms—ahead, no sign of predictable human intrusion, all is free and enduring.

We turn and head back, the bridge replaced by the spires of downtown buildings, the mast-like cranes of construction over the river. I turn once again to see the future, and then commit to going home. Perry finds a golden retriever much younger than himself to play with, one of the thousands of golden retrievers there must be in this neighborhood, all with their loopy smile, honey red coats, bouncy gaits, the equivalent of the Victorian canaries whose song marked happy domesticity. A man on a small bike pedals hard by me and takes an unexpected turn up into a less-visited path. Within seconds another man comes running hard down the same path, his back to me. I see he is zipping up his fly as he runs, adjusting himself. He is dressed for work, a plaid shirt, black pants, a very ordinary-looking man now slowing down his gait as he feels safer. I think of what may have occurred—his hand stroking his cock, and then the unexpected visitor or he stopped to relieve himself—and is caught in the act by the furiously pedaling younger man—or did he leave behind a braver man, leaning against a tree, with a slight smile on his face as strokes his own desire.

I do not begrudge these men their outdoor adventures, I just wish my beloved women would also walk abroad in their early morning desire, their breasts free, their bodies unfettered by fear or decorum. Even Whitman could not see in his all acceptance the woman lounger, the woman wanderer, the woman lover and beloveds who lean against the rail and smile on the day. 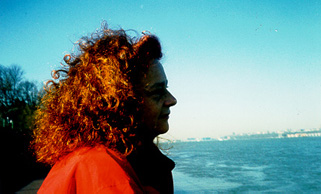 
Messages for Joan? Problems with this site?
Please contact the WebMs.